We utilize all the very latest technology in the services we offer. Get in touch with us if you have any questions.

What is the VELscope?

The VELscope Vx, the latest model release of the VELscope technology, uses natural tissue fluorescence to discover abnormalities in the oral mucosa. The VELscope is an extremely effective aid for discovering and defining the extent of a wide range of mucosal abnormalities, including oral cancer. Importantly, VELscope helps you discover problems before they can be seen under ordinary white-light conditions. 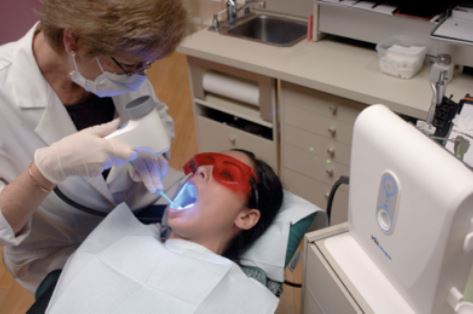 The VELscope System Is:

Why Is the VELscope System Important?

The VELscope System Plays an Important Role in the Fight to Reduce Oral Cancer. According to the SEER database:

Used in conjunction with our conventional oral exams,VELscope provides visual information that cannot be acquired in any other way,and helps discover problems that may not be apparent to the naked e

A recent 620-patient study at the University of Washington is giving us additional insights into VELscope’s potential. The addition of VELscope to routine clinical exams resulted in the detection of a number of mucosal abnormalities not detected by a conventional exam. The study found that 69 (11.1%) of the routine dental patients examined had lesions only detected via VELscope assessment. In addition to the detection of oral cancers and precancers, the VELscope system is showing itself to be a powerful tool for the discovery of mucosal abnormalities such as:

The discovery of a wide range of mucosal abnormalities is part of a dentist’s ongoing quest to maintain and improve their patients’ oral health. Such discoveries should not be considered ‘false positives’ simply because they are not cancerous or recancerous.

What Are the Steps in the Event Of a Suspicious Finding?

If an abnormality is discovered during the course of an exam, we will attempt to determine its cause based on all of the clinical information acquired during the oral assessment process. If appropriate, after addressing the presumed cause, we will schedule a follow-up visit with you in 2-3 weeks to see if the abnormality has resolved. Persistent oral lesions require further assessment that normally includes biopsy or referral to an appropriate physician for additional diagnostic evaluation.

Partial Dentures Dr. Husain can recommend a partial denture, when surrounding teeth on the either side isn’t strong enough to support a fixed bridge. A partial denture can come in handy to retain life in […]